It is hard to believe that another year has gone by so fast. It seems just yesterday we were saying Happy 2013 and now we are welcoming 2014. It was a great year for us at St. John’s Jewelers.  We turned 40 years old making us one of the oldest jewelers in Ellicott City and Howard County.  Linda’s father and original owner of St. John’s Jewelers turned 90 years old and we were so happy he was able to join us at our 40th Anniversary Celebration.

We were very excited that the Howard County Times featured our 40th Anniversary in their paper and also celebrated Linda and her father, Irwin Farber.  It was also very exciting to be featured as a family business in the Howard Magazine. 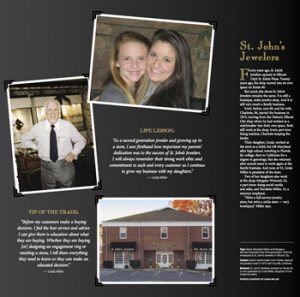 We were also thrilled to get out in the community and support the 2 Miles for 2 Hearts Memorial run on August 17,  in honor of  Rose Mayr and Elizabeth Nass, the Mt. Hebron High school graduates who died in Ellicott City’s tragic train derailment.

In addition to supporting many local schools in Howard County, we also teamed up with Small Miracles Cat and Dog Rescue and held a fundraiser at the store.  We had kittens and dogs and raffles! Oh my!  It was a great day and we really enjoyed helping this local no-kill animal shelter.  We can’t wait to do it again in 2014.

All in all, it was a terrific year.  We participated in Small Business Saturday and hosted several other events through-out the year like our Super Bowl Party, Spring Fling and our Annual Holiday party.

I think one of the best ways to sum up 2013 is this picture of Linda from her feature in Her Mind Magazine.  St. John’s Jewelers is all about getting to know our customers and having fun at the same time.  If you have not had a chance to meet Linda and the gang at St. John’s Jewelers yet make sure to stop by in 2014.  We would love to meet you! 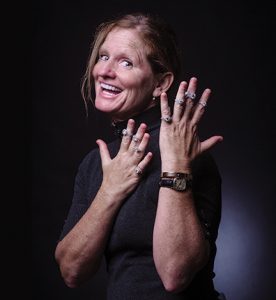 Thank you to all of our friends for making 2013 very special!  We wish you a Happy New Year and the very best in 2014!